Made from the beans of coffee berries that have been eaten and excreted by the Asian palm civet, or civet cat, this coffee, which is known as “kopi luwak” or “cat poop coffee,” can be found in cafés and coffee gardens in Bali, Indonesia, and elsewhere. Unsuspecting tourists from all over the world visit such cafés, where they’re duped into buying the coffee and seeing the normally solitary civet cats in a setting that hides their cruel treatment. Now, tourists can see what really happens to civet cats who are exploited for coffee.

PETA investigators visited civet farms in Bali and found deplorable conditions at every one. They also went to a live-animal market, where potentially sick civet cats are sold, and saw how easily they could spread deadly diseases to other animals, including humans.

Watch the video to see for yourself how civet cats are suffering for this disgusting drink and find out what you can do to help them.

The Next Disease Outbreak Is Brewing

Kopi luwak is made by capturing civet cats in their natural habitat in Indonesia when they’re about 6 months old or by buying them at live-animal markets; confining them to miserably small cages; feeding them an unhealthy, unnatural diet of primarily coffee berries; and then harvesting the coffee beans that they excrete in their feces. The coffee is exported all over the world, even though, following the SARS outbreak in China, researchers found that the SARS coronavirus had jumped from civet cats to humans. Scientists have also identified civet cats as a possible “intermediate host” for COVID-19, potentially allowing the virus to mutate and pass from bats to humans. 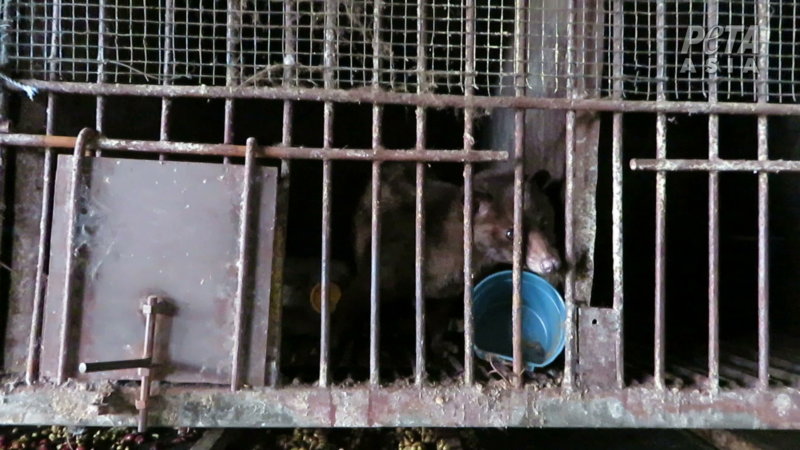 Civet cats who are “lucky” enough to survive beyond their usefulness to the kopi luwak industry can sometimes be sold to live-animal markets, putting them in direct contact with humans and providing the perfect opportunity for SARS or some other virus to mutate and jump from one host to another. 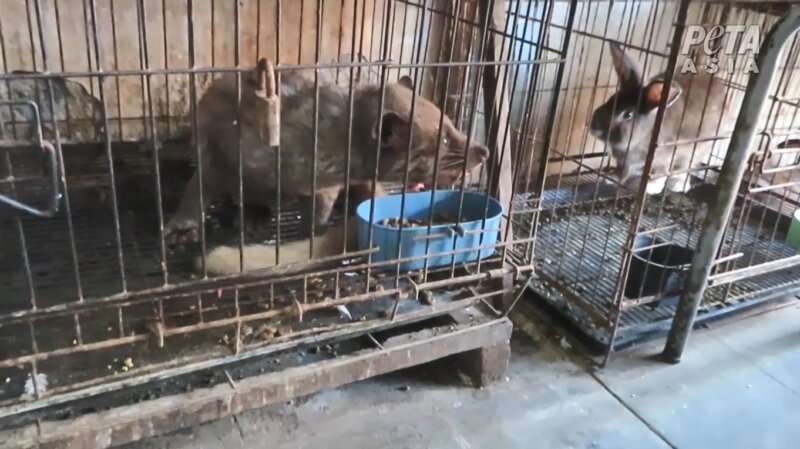 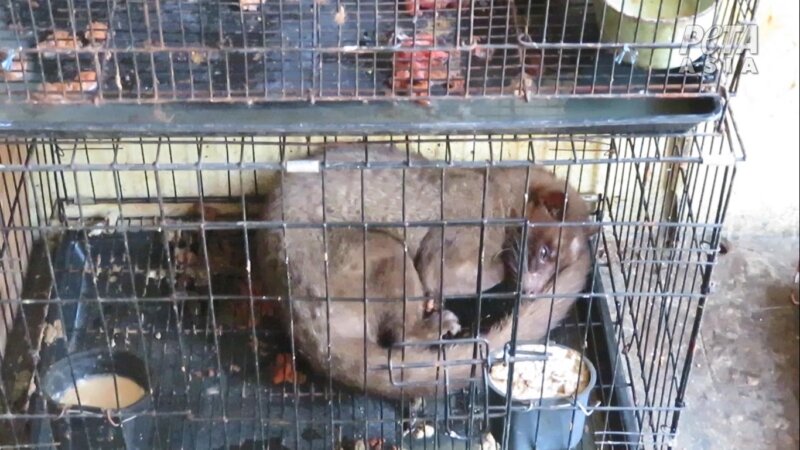 Cruelty in a Cup

In addition to the infection risk that civet farms and sellers pose, investigators found pervasive cruelty at every farm they visited. Civet cats were commonly confined to barren, filthy cages that were encrusted with feces, dirt, and decomposing berries and often covered with cobwebs. 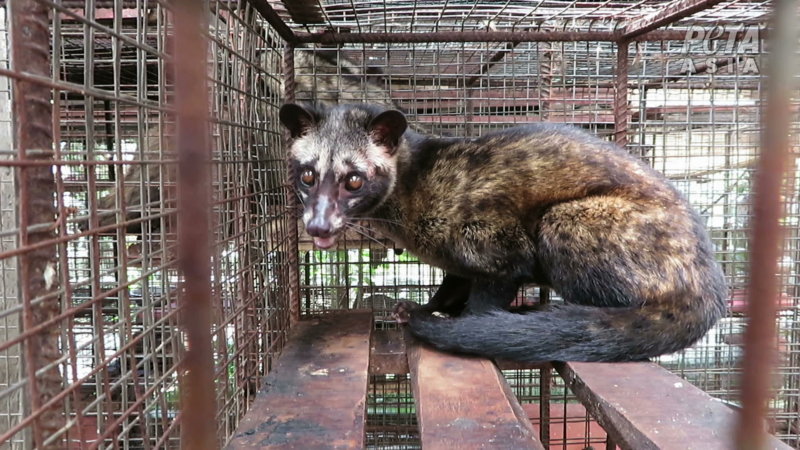 These nocturnal animals were kept mostly in outdoor cages in the sunlight with no dark, quiet spot to sleep in during the day, adding to their misery and poor health. Some panted constantly in the heat. 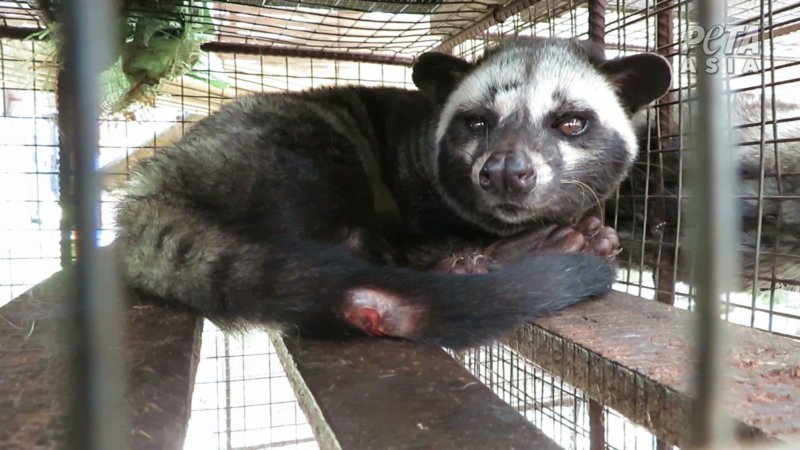 Many had painful open wounds for which they did not appear to receive any medical care, and they exhibited abnormal behavior such as biting their own tails and repeatedly pacing back and forth, indicating severe psychological distress. 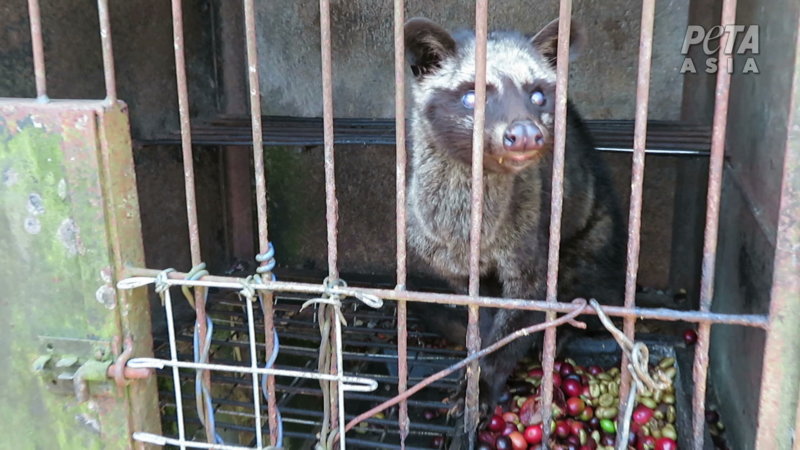 Investigators saw one civet cat who appeared to be blind but was still being used for kopi luwak production.

Although kopi luwak is often advertised as “wild-sourced,” one farmer told an investigator that it would be nearly impossible to produce it exclusively from wild animals and that the industry deliberately mislabels coffee from captive civet cats.

The producer admitted that they may collect a small amount of feces produced by free-roaming wild civet cats in the forest and mix it in with feces from the caged civet cats so they can claim that their coffee is wild-sourced. 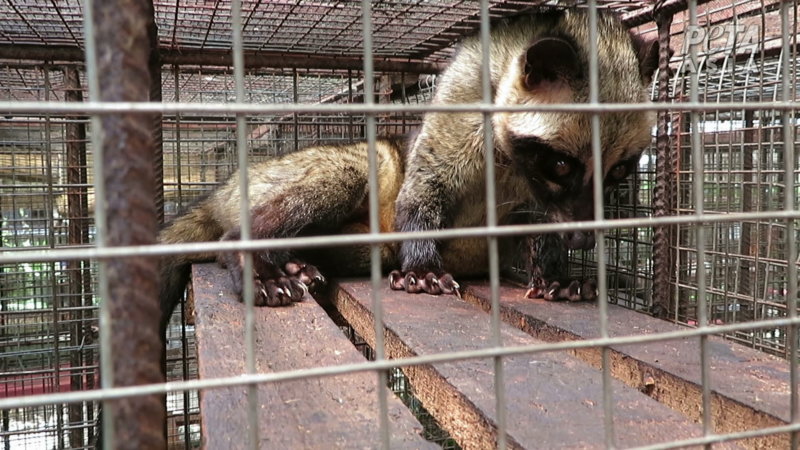 It's Time to Cut the Crap

Coffee made from beans excreted by imprisoned, stressed, unhealthy animals who have been deprived of everything that would make their lives worthwhile isn’t a delicacy—it’s a disgrace. And it’s another pandemic in the making.

As kopi luwak is exported overseas, no matter what country you are in or what assurances you have received, please don’t purchase or drink it.

PETA has sent Bacha Coffee evidence that “wild” civet coffee is essentially a lie, but they have ignored our requests to stop selling it. Help us urge Bacha Coffee to stop funding cruelty to civet cats by ending their sale of kopi luwak today.